Shorting volatility proved to be very profitable historically. The reason is that VIX futures are drifting lower over time, so all you have to do is being short a product that is long volatility (like VXX) or being long an inverse product (like SVXY). Looking at VXX historical chart tells the whole story:

So what’s the catch? Well, the issue with going short VXX (or being long SVXY) is those occasional big spikes, like the one in 2008. So the trick is to find a strategy that goes short VXX or long SVXY, but at the same time, doesn’t lose much during those occasional spikes.

This article tells the story of an incredible SVXY trade that was a big winner despite the total collapse of SVXY.

Few months ago, SteadyOptions introduced a new strategy called PureVolatility. The portfolio is managed by  our veteran member and mentor, Scott Batchelar. Here is an extract from the strategy introduction:


The PureVolatility model portfolio will be based on total capital amount of $10,000 with a 5% allocation on risk.  This is very important as those who are trading in a Reg-T account would on average need $10,000 in initial margin to hold the position even though the risk may only be $500.  Portfolio Margin accounts would only require the $500 max loss amount.  Reg-T is somewhat antiquated when it comes to margin for a Collar spread. However, this really should not be an issue because if one does not have $10,000 to put aside for this strategy it is probably not appropriate.  Furthermore, the increased margin amount will keep members from over allocating to this very aggressive strategy.  We will target a risk reward of better than 1:1 for a two week holding period.

Here is an example of the Hedged Collar strategy sized for the model portfolio:


Using the above example, here is the P/L chart of the trade: 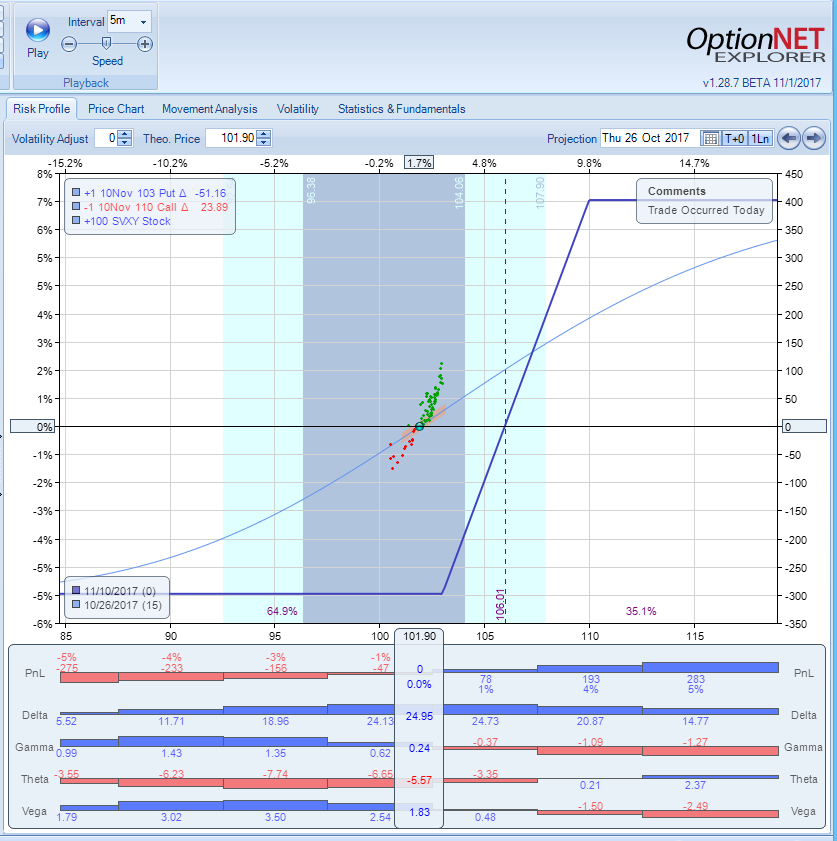 Please note that the profit potential is around $400 and risk around $300.

For a strategy that wins around 80% of the time, this is an incredible risk/reward.

But it gets even better.


One of our other veteran members posted the following comment on the forum:

I agree with the trade rationale, but had a thought about a tweak to improve the trade structure that I wonder if you considered – that is replacing the 100 shares of SVXY with a deep ITM call, 90 delta or more.   I see two main benefits.


After some discussion, it has been decided to modify the trade and use deep ITM calls instead of the shares.

Here is an SVXY “modified” collar entered on January 30 with SVXY at 114:

I opened a new collar but I’m holding off on selling the call: 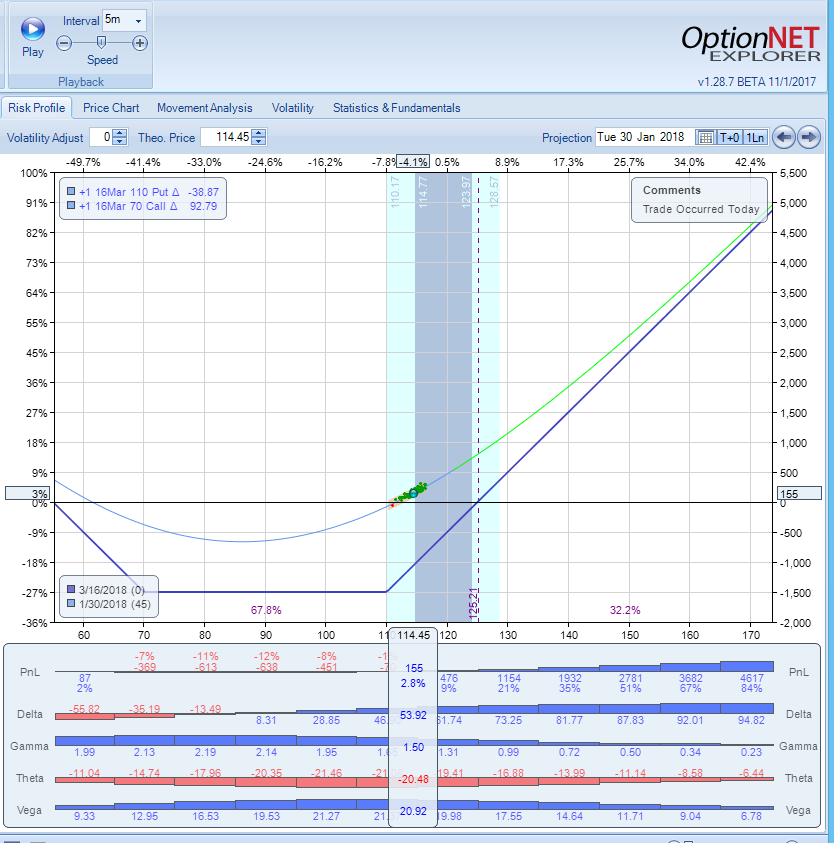 Please notice how using ITM calls instead of shares allows to reduce the risk if the stock makes a big down move.

The next day SVXY moved higher and short call has been added. 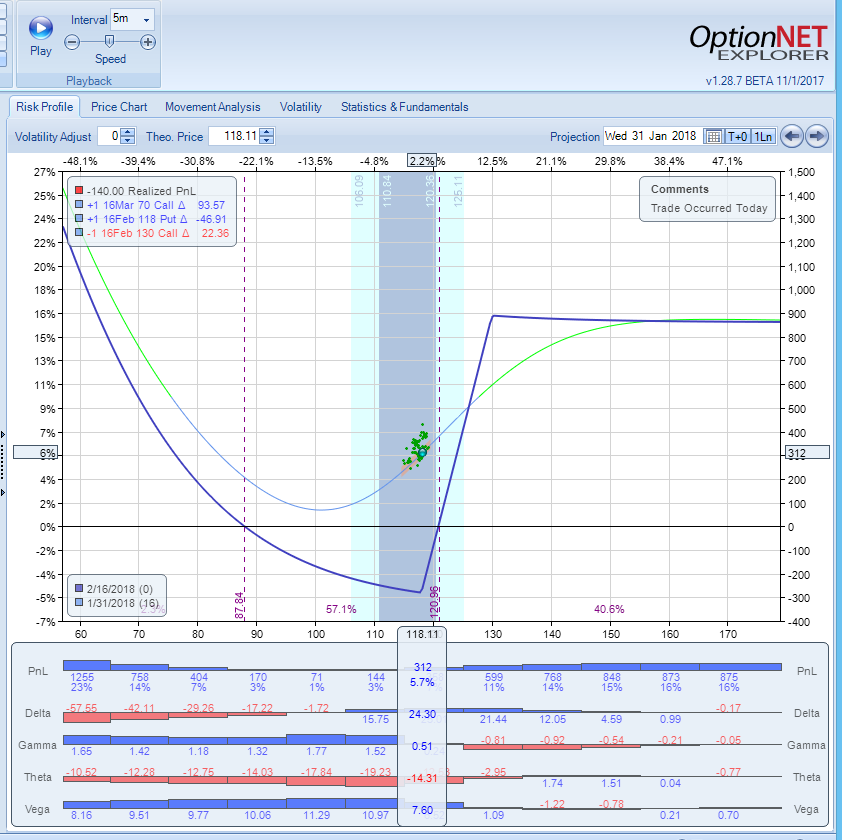 On February 2 SVXY started to move down. By the end of the day on February 5, SVXY went down around 40%. After few adjustments the P/L chart looked like this: 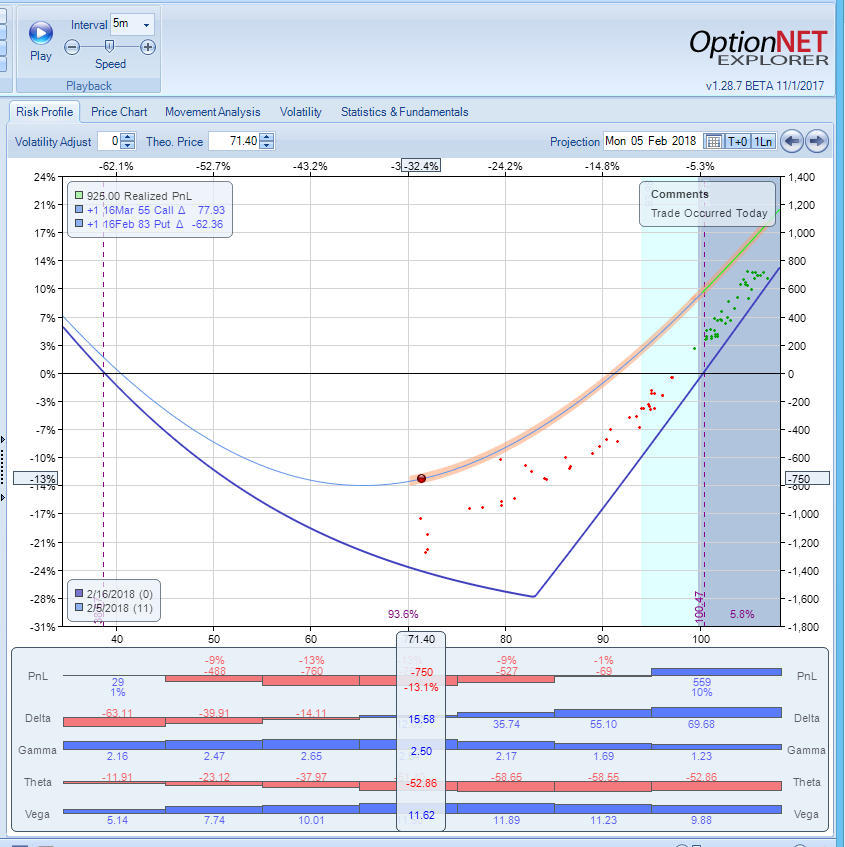 The trade was down $750 or 7.5% loss on $10,000. This is completely reasonable, considering that the underlying was down 40%. Any bounce to $90 area should bring the trade back to breakeven.

But then black Tuesday came. SVXY opened around $11, 60% down. The calls became nearly worthless, but the puts were the big winners, far outpacing the losses in the calls: 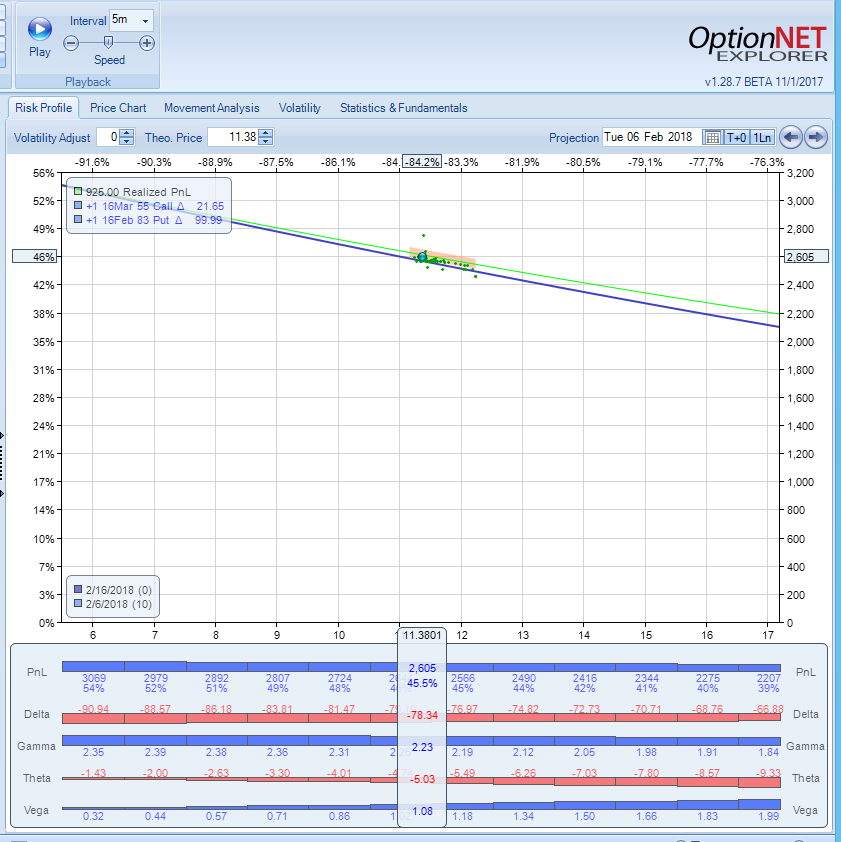 A trade that was long SVXY, was a big winner after SVXY went down 90%+. This is options trading at its best. And this is the power of our trading community.

Read the full description of the PureVolatility strategy here.