I began my career on the floor of the Chicago Board of Options Exchange in 1999 straight out of college. For a year, I stood next to two options trading legends, soaking up all of their wisdom as their clerk. That year, the market ripped higher as virtually every dot-com stock exploded higher day after day. I learned a great deal during that bull run.

Here is a picture of a younger me (with more hair) in my trading pit on the CBOE.

Soon after I became a trader myself, the Nasdaq fell apart. The dot-com bubble burst, and valuations were reset for virtually the entire market. I learned even more during those bearish years than during the bull market years! Certainly I learned about catching falling knives in a bear market.

And one rule that I took away from the bear years is about stocks that have taken a big dive on earnings.


The old trading rule that was hammered into my brain by my two trading legend mentors was this:


If a stock takes a big fall, whether it’s on earnings or some other news event, you MUST wait at least three trading days before even thinking about putting on a bullish position.


The rationale behind The Three-Day Rule is that if a large hedge fund or institution owns millions of shares of a stock, it won’t be able to sell out of its entire position in a day or two without causing the stock to fall.


Instead, the institution will parcel out its sales over a couple of days, so they don’t depress the stock and can sell at better prices. For example, let’s take a look at LinkedIn, which fell from 192 to 108 in one day on a disappointing earnings release. That was a staggering fall! The next day, the downgrades came pouring in from the brokerage houses (thanks for the downgrades after the fall!).


Here were LNKD’s closing prices on the day of its earnings report and the following days: 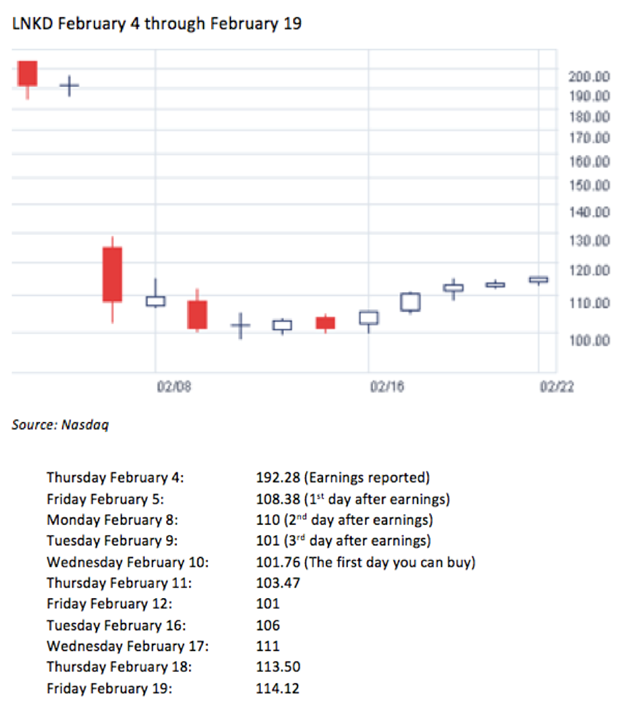 As you can see, there remained selling pressure on LNKD in the three days after the big drop. Then, slowly but surely, the stock stabilized, and buyers began to take over.


I do want to warn, if you follow the three day rule I am sure you are going to miss some stock rebounds. This isn’t a rule that works 100% of the time. However, it has been my experience that more times than not it takes time for stocks to be sold out by institutions, before rebounding.


However, if you can’t waitto play a bounce you could sell puts to get bullish exposure. This is an options strategy that is often used by traders who are willing to enter a long stock position in a stock at a lower price than the stock is currently trading at.


Or longer term, an options trader could buy LEAPS (Long-term Equity AnticiPation Securities) which are options with expiration dates that are longer than one year. The advantage to this strategy is that it gives the holder of the LEAP option a great deal of time for the stock to recover and before the option expires.


Your guide to successful options trading,

Jacob is a professional options trader and editor of Cabot Options Trader. He is also the founder of OptionsAce.com, an options mentoring program for novice to experienced traders. Using his proprietary options scans, Jacob creates and manages positions in equities based on risk/reward and volatility expectations. Jacob developed his proprietary risk management system during his years as an options market maker on the Chicago Board of Options Exchange and at a top tier options trading company from 1999 – 2012. You can follow Jacob on Twitter.